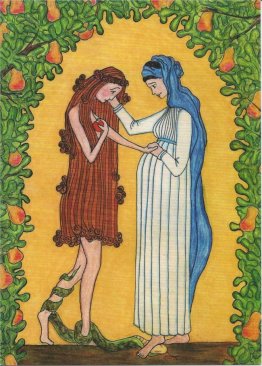 This picture is titled “Mary and Eve.” It’s a crayon and pencil drawing created by Sr. Grace Remington, OCSO, of the Cistercian Sisters of the Mississippi Abbey. I often see it shared around Christmas time. The image portrays Eve holding the fruit, the shame of her sin clearly seen on her face, while the serpent is wrapped around her ankle. Lifting up her head is Mary, carrying the Messiah inside her womb, while crushing the head of the serpent. This piece of art is stunning, and the message rings loud and clear.

However, every time I see it, I can’t help but notice that something very important is missing. Did you spot it as well?

One little line from Genesis 3:6 is often overlooked, but it is extremely important.

When the woman saw that the fruit of the tree was good for food and pleasing to the eye, and also desirable for gaining wisdom, she took some and ate it. She also gave some to her husband, who was with her, and he ate it.

Did you catch that? The whole time the serpent was talking to Eve, Adam was present, and did nothing. Yet, the message that has often been proclaimed is that “this is all Eve’s fault.” One only has to look at a long history of Jewish and Christian interpretation to see this is the case. And of course, when Adam and Eve get busted, what is the first thing out of Adam’s mouth?

So let me get this straight… The man stands passively aside and does nothing while the serpent speaks to Eve. He takes no ownership whatsoever, completely throws Eve under the bus, and then he lets her take the full blame for thousands of years?

Unfortunately, this way of acting (or better said, NOT acting) continued. I could point to many examples, but an obvious one would be the story of the woman caught in adultery in John 8. In this story, the Pharisees and Teachers of the Law drag a woman out in front of Jesus and say “this woman was caught in the act of adultery. The law of Moses says to stone her. What do you say?”

Now, correct me if I’m wrong, but doesn’t adultery take two people to commit? And if this woman was caught mid-act, wouldn’t the man have had to be present? Yet, only the woman gets dragged out. Only the woman is blamed. Sound familiar?

Now back to Eve. Nevermind that Paul, in Romans 5, places the sin completely on Adam, Eve still gets the reputation as the one who ruined it for all of us, even in the painting above. This view has drastically impacted the ways in which the Church, and men in general, view women.

I love this painting. I think the message is life changing. I just wish it showed the whole picture. Maybe someone who is much better at drawing than I am can take a crack at it.

So why a series on women? When it comes to women in the Bible, I mostly see people do one of two things happen. Either they completely ignore the women in Scripture, or they make them the antagonist of every story. I think it’s time to reclaim the ways in which the Bible speaks to females. You might call it a “HERspective”.

Next week, we’ll talk about Drama and Trauma

“There are wounds that never show on the body that are deeper and more hurtful than anything that bleeds” – Laurell K. Hamilton

When I ask women their common struggles, one word seems to come up all the time: Drama. I’ve been told that it’s impossible to have a group of girlfriends without also having drama. Maybe that’s true, maybe it isn’t.

There’s another word that also seems to come up all the time. Trauma. Whether it’s abuse, harassment, abandonment, neglect…trauma seems to be a shared experience among women as well.

The story of Sarah and Hagar is one of some major drama between two women. This love triangle between Abraham and the two women could easily read as a reality tv script. But I’m less concerned with the drama, and more concerned with the trauma. How did they experience their world?

“was unable to become pregnant and had no children” – Genesis 11:30

Maybe you know someone who has this same struggle. Maybe you’ve had this struggle in the past. Maybe you are going through this struggle right now. A woman unable to bear children in this time period would have been looked at as virtually worthless within the structure of Ancient Near Eastern society. Maybe you can relate to feelings of shame, hopelessness, or the feelings of worthlessness that I’ve heard many women communicate experiencing during fertility struggles.

Immediately after we meet Sarai, her husband Abraham gets a call to uproot his entire family and go to the land God will show him. Sarai must leave everything and everyone she has known. But her husband was called by God! What else is she supposed to do?

If this isn’t enough to deal with, famine strikes and Abraham is forced to take his family to Egypt. What does he tell his wife?

Genesis 12: 11-12 – Abram said to his wife, Sarai, “Look, you are a very beautiful woman.12 When the Egyptians see you, they will say, ‘This is his wife. Let’s kill him; then we can have her!’ 13 So please tell them you are my sister. Then they will spare my life and treat me well because of their interest in you.”

Wait! What?! Abraham is convinced that if they go to Egypt, the Egyptians will kill him and take his wife, so he comes up with this plan. Let’s just say you are my sister. They will still take you, but at least I’ll be ok! What choice does Sarai have in the matter?

So that’s exactly what Abraham does. He tells the Egyptians that Sarai is his sister, and  Pharaoh gives Abraham a bunch of gifts in exchange for taking Sarai to his palace as a wife.

The story does not tell us how much time passes. How long did Sarai live with the Pharaoh? Was she forced to have sex with him? How terrifying must it have been to be handed over by your husband and forced to sleep with a stranger? How would it feel to know you were exchanged for some sheep, goats, cattle, and donkeys?

Eventually, Pharoah finds out what Abraham has done thanks to some plagues, and he sends Sarai and Abraham on their way. The next time we hear of Sarai again, she is completely devastated by not being able to have children. She makes a suggestion to her husband,

Genesis 16: 2 – “The Lord has prevented me from having children. Go and sleep with my servant. Perhaps I can have children through her.”

Sarai is hurting. Think of all she has been through. Think of the pain of her barrenness. Think of her husband who gave her away to another man to save his own skin. In her hopelessness, she tells her husband that he should sleep with someone else. Maybe that way he can have a child.

Men, here’s some advice. If you and your wife are struggling to have kids and she says “maybe you should just go be with someone else.” Don’t take her up on that offer! That would be a terrible move. Surely Abraham is smart enough to take this advice as well right?

How must Sarai have felt when her husband agreed?

To make things worse, the woman her husband has sex with….gets pregnant.

Fast forward. Sarai has now had her name changed to Sarah. God has promised her that she will conceive, but she is old, and it still hasn’t happened. Abraham decides to move again. When they arrive, what’s the first thing Abraham does?

Genesis 20: 2 – Abraham introduced his wife, Sarah, by saying, “She is my sister.” So King Abimelech of Gerar sent for Sarah and had her brought to him at his palace.

This time, God has apparently had enough too. He comes to the king in a dream and lets him in on what’s happening. The story makes sure to let us know the king did not sleep with Sarah yet. As if that is supposed to make it all better. How must Sarah have felt being handed over by her husband…again? Was she terrified sleeping in the palace that first night wondering how long it would last this time?

After this, a miracle happens. Sarah does give birth in her old age. It’s a son. She names him Isaac. He is her pride and joy. It lasts for all of one page…

God tests Abraham’s faith by telling him to offer Isaac as a sacrifice. So Abraham says, ok. There’s much to be said about that, but this story is about Sarah.

The next day, we read that Abraham got up really early, took Isaac with him, and set out. Why did he wake up so early? The story doesn’t say, but I have a hunch. Who would probably still be sleeping? That’s right. Sarah. Nowhere in the story does Abraham tell her what he is going to do.

How did Sarah feel waking up and seeing her husband and son gone? Was she panicked? Was she completely unaware? How would she have responded if Abraham had told her?

Genesis 22:19 – Then they (Abraham and Isaac) returned to the servants and traveled back to Beersheba, where Abraham continued to live.

There’s just one problem. Abraham doesn’t live in Beersheba. Abraham lives in Hebron. Why doesn’t Abraham go back home? Why does he decide to live in a completely different town? Is it possible he does not want to face his wife and tell her where he went? By my count, this is now the third time he has abandoned her. He gave her away to the Pharaoh. He gave her away to Abimelech. Now he just isn’t going to come home. How long does he decide to wait it out? Turn the page and…

Genesis 23:1-2 – Sarah lived to be a hundred and twenty-seven years old. 2 She died at Kiriath Arba (that is, Hebron) in the land of Canaan, and Abraham went to mourn for Sarah and to weep over her.

Abraham left her alone until she died. Abraham was not even there for her in the final days. He waits until she dies, and only then does he travel back to Hebron to “mourn” for her.

This is the story of Sarai/Sarah

She was forced to move around. She was abandoned by men in her life. She was treated as a possession. She was forced to have sex with strange men. Her husband took her son without telling her, and then left her alone. How must she have experienced her world? I imagine she experienced it in much the same way that many of my female friends, family members, and my adopted daughter have.